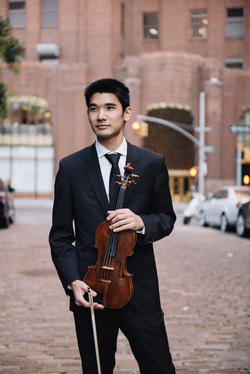 Praised by The New York Times as “spellbinding,” violinist Alex Shiozaki is emerging as a strong advocate for the music of today. He has performed in venues including Carnegie Hall and Alice Tully Hall in New York City, Paine Hall at Harvard University, and Sapporo Concert Hall Kitara in Japan. At home with music new and old, he has appeared as a soloist with the Sapporo Symphony, Sendai Philharmonic, AXIOM Ensemble, and Juilliard Orchestra.

Dedicated to chamber music, Alex is a member of the Momenta Quartet, two-time recipient of the Koussevitzky Foundation commission grant. The Quartet has appeared in such prestigious venues as The Library of Congress in Washington D.C., the International Cervantino Festival in Mexico City, and the Ostrava Days Festival in the Czech Republic, as well as at universities including Harvard, Cornell, and Brown. Alex also performs in recital across the United States as the Shiozaki Duo, alongside his wife and pianist Nana Shi. In New York, he appears regularly with the Argento Ensemble, Le Train Bleu, and American Contemporary Music Ensemble. In the summer of 2011, he joined the Metropolitan Opera Orchestra on their tour to Japan.

Alex's diverse interests in music have led him to an international tour with the ambient drone-music duo Stars of the Lid, playing shows in Montreal, New York, and Los Angeles. An avid collaborator, he has performed with the Mark Morris Dance Group, Lar Lubovitch Dance Company, and with dancers from the New York City Ballet. Complementing his performing experience, Alex is part of the faculty of Juilliard's Music Advancement Program, as well as a violin instructor at the Interlochen Arts Camp.