On the morning of our third anniversary, I took Nana out for a morning picnic on Tanglewood grounds. She was a little surprised that I was making such a big deal about our anniversary this year, but I managed to allay major suspicion by making up nerdy musical reasons about why the number 3 was so important. (Bach, the Holy Trinity, etc.) It was a cider, cheese, and crackers affair, as you can see here: 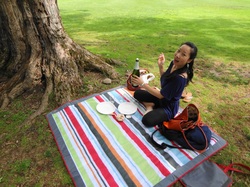 Nana's look of shock is from apple cider foam bubbling out of the bottle after explosive decompression. She still has no idea what's coming up. For my non-Tanglewood friends, here's a panoramic view from our picnic:

That building is the Shed, where the Boston Symphony Orchestra performs several times a week. On this Wednesday morning, however, it was actually the Tanglewood Music Center Orchestra rehearsing Brahms's Second Symphony. A perfect backdrop for the event! 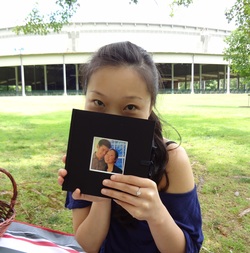 Here is Nana's first surprise of the morning: a photo album! I had been secretly constructing this for the past two months, and she was happy to sit down with me and go through the album. And at the end of an album was a question.

At that moment, TMCO just happens to start the second movement of the Brahms. I kid you not. 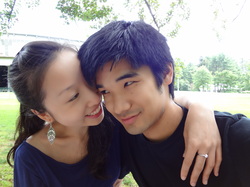 I had slightly overshot the size of the ring (it's HARD to guess a girl's ring size!) so Nana is wearing the ring on her middle finger for now. It didn't take long for word to spread through Tanglewood, thanks to a missed rehearsal (sorry, Adrienne!) and Lunch Club with all of TMC! Also Facebook.

A week later, we got the keys to our new apartment in Astoria!